The Rosa and Raymond Parks Institute for Self-Development, the ONLY institute founded my Rosa Parks and Co- Founder Elaine Steele, still continues. Though small in size, we are mighty in the number of Volunteers and support we have through the many projects works we do. 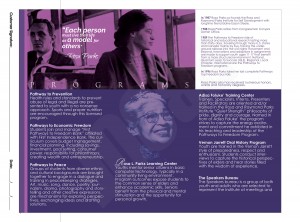 Come out and Volunteer, Donate, Support and get involved! 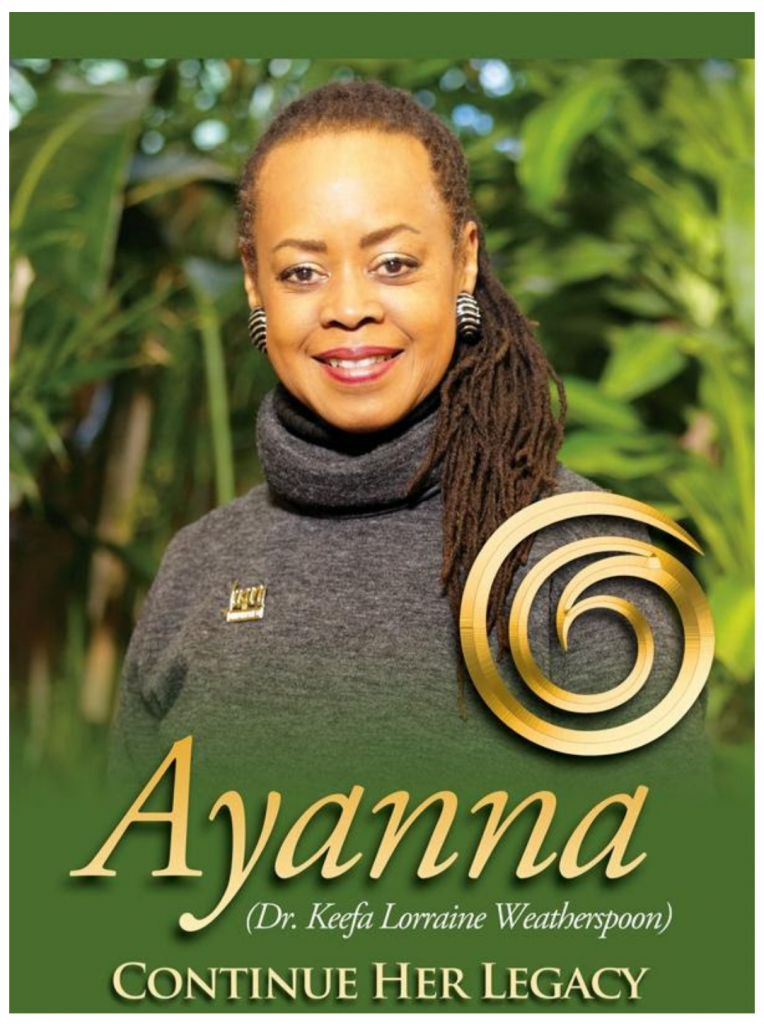 AGAIN, WE DEEPLY REGRET TO INFORM YOU THAT DR. KEEFA
LORRAINE WEATHERSPOON
(AYANNA) MADE HER
TRANSITION ON FEBRUARY 24. PER THE REQUEST OF HER FAMILY WE INVITE YOU TO JOIN US FOR A MEMORIAL CELEBRATION
ON SATURDAY, MARCH 5TH AT
DETROIT UNITY TEMPLE, 17505 SECOND AVENUE IN DETROIT AT 11:00 AM. PLEASE COME JOIN US TO CELEBRATE HER LIFE AS A PROFOUND MASTER TEACHER, HEALER, OUTSTANDING
ENTREPRENEUR, OWNER OF THE WATER STATION, FOUNDER OF THE SANKOFA LIFE CENTER, MEDIA PERSONALITY,
AUTHOR, MENTOR, AND FRIEND TO MANY AROUND THE WORLD. LET’S CONTINUE HER LEGACY.
IF YOU HAVE ANY QUESTIONS, PLEASE CALL (313) 366-5250.  AS SHE WOULD SAY, “BLESS YOU.”
February 15, 2016 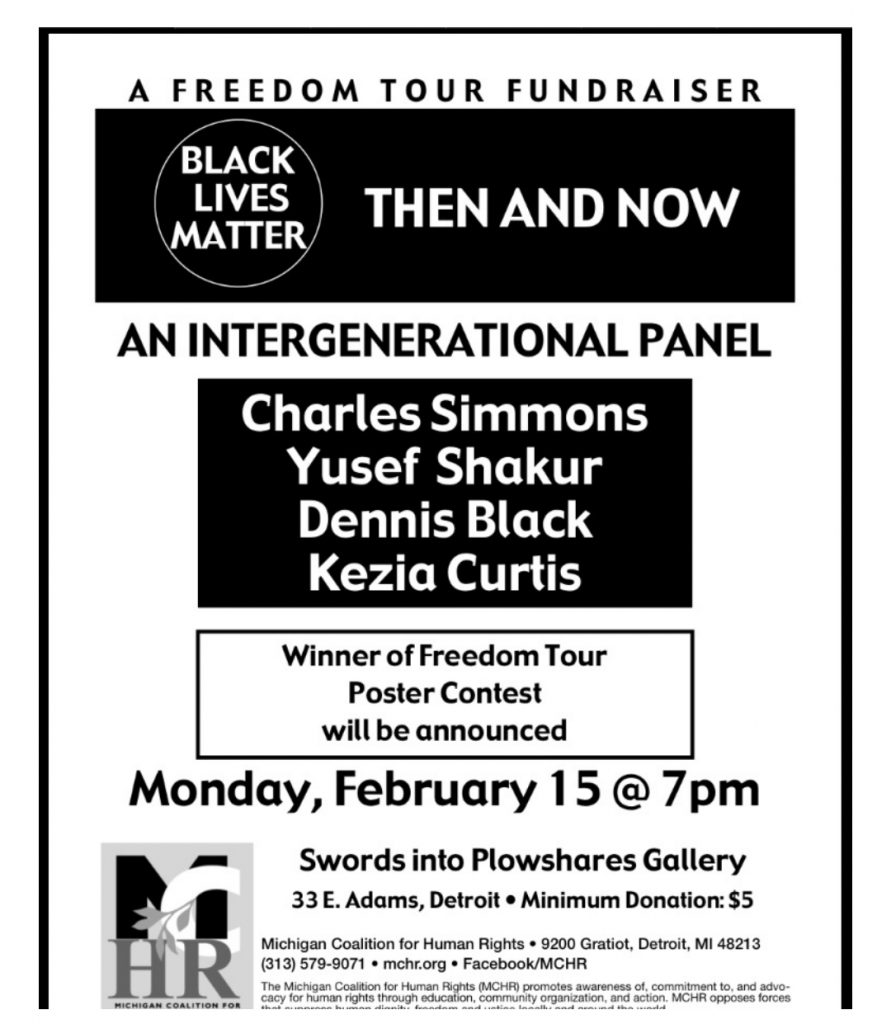 Rosa Parks Collection at The Library of Congress

TITLE: Rosa Parks Collection: Telling Her Story at the Library of Congress

Highlights of the collection of Rosa Parks, a seminal figure of the Civil Rights Movement, on loan to the Library from the Howard G. Buffett Foundation for 10 years.

Howard Buffett decided to purchase this special collection in 2014, when he learned that it was languishing in an auction warehouse. He wanted to bring these rare items into public view and ensure their preservation. The Rosa Parks Collection reveals how deeply she believed in a moral imperative to oppose discrimination and the denial of individual rights. That belief most famously resulted in her decision to challenge the bus segregation laws in Montgomery, Alabama, in 1955. But her autobiographical writings reveal numerous times in her life when that conviction motivated her to act.

The collection documents many aspects of her private life as well as her public work on behalf of civil rights for African Americans. While the 7,500 manuscripts and 2,500 photographs span 140 years, the content focuses on the 1950s through the 1990s and includes Mrs. Parks’ own writings, letters from presidents, her Congressional Gold Medal and Presidential Medal of Freedom, and hand-drawn cards of appreciation from scores of schoolchildren.

This video contains highlights from the collection and a look behind the scenes at how the Library’s team of experts in cataloging, preservation, digitization, exhibition and teacher training are making the legacy of Rosa Parks available to the world. Items from the Rosa Parks Collection will be available online later this month.

UPDATE TO ORIGINAL STORY! Flagstar Bank to stop the eviction of Barbara Campbell!

Don’t Forget Ms. Campbell goes to Court on Wednesday. Pass it On!

The TV coverage of the demo at Flagstar Bank in support of Barbara Campbell is now on the web site, link below. Ms. Campbell wants everyone to know how happy she was to see so many people supporting her!

Ms. Campbell’s scheduled court hearing is Wednesday, January 27, 1:00 pm in front of Judge Perkins, 4th floor of 36th District Court, 421 Madison at Brush in Detroit. We can keep up the pressure in the meantime by calling Flagstar and Fannie Mae to protest the threatened eviction.

Please also tell Fannie Mae that Flagstar’s deception should not cause Ms. Campbell to be evicted. Call 1-800-732-6643 and press “4” to report fraud.

We will be attending the Open House for the Homeless 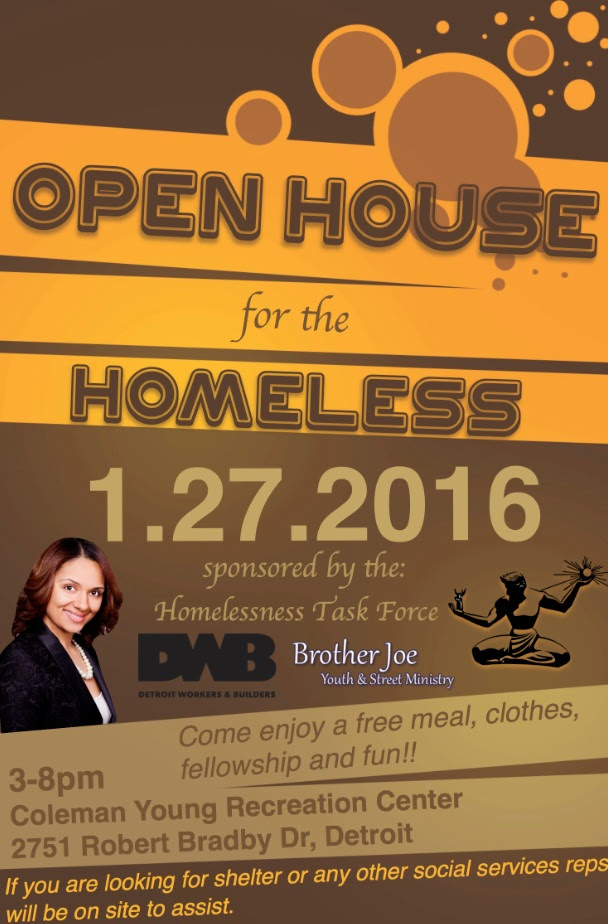 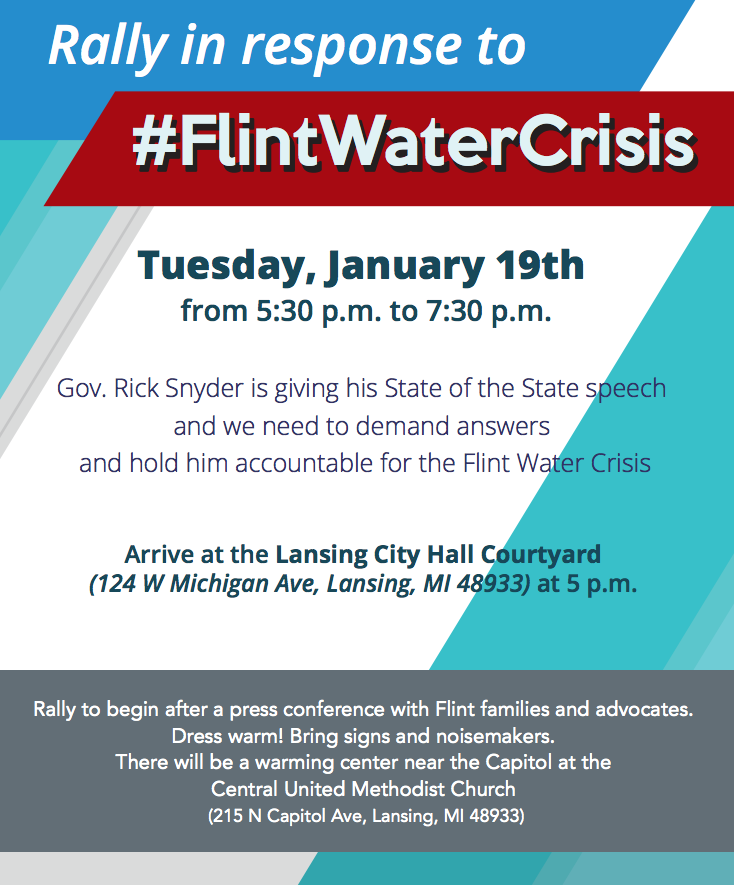 UPDATE TO ORIGINAL STORY! Flagstar Bank to stop the eviction of Barbara Campbell!

As Barbara Campbell Protests On Saturday January 16th 2016 in her wheelchair right before her dialysis treatment; she fights to stay in her home along with other supporters/ protestors on that brutal cold day. Along with the ABC NEWS Media to cover her story!

As Barbara Campbell fights to survive

One medical disaster after another — cancer, heart surgery, loss of kidney function and 3 strokes — Flagstar Bank has foreclosed on her Detroit home.

Now, after many promises that it

Wouldn’t do so, the bank is moving to evict Ms. Campbell. Fannie Mae owned the mortgage, which Flagstar serviced for the federally administered mortgage company.

As a medical hardship case,

Ms. Campbell clearly qualifies for the mortgage modification she applied for after being diagnosed with cancer. She did everything asked of her and was told that during the modification review there would be no foreclosure on her home. That promise was broken in 2013 when the house suddenly went to sheriff’s sale.

Ms. Campbell appealed for help to

Half mile east of Inkster Rd.

Flagstar said it would not evict Ms. Campbell. It has now tossed that pledge aside and is seeking an eviction order from the courts.

This is the same type of action that

Brought Flagstar before the federal Consumer Finance Protection Bureau in 2014 for “illegally blocking borrowers’ attempts to save their homes.” Flagstar signed a consent order, paid $37 million in penalties, and promised to stop denying loan modifications to qualified home- owners. It has now tossed that pledge aside as well.

Flagstar claims to be a “community”

Bank and a Michigan company, but it is actually owned by Matlin Patterson Global Advisors, a New York company that Forbes Magazine described as a leading “Vulture Investor,” known for “picking the bones of crumbling companies.”

Please also tell Fannie Mae that Flagstar’s deception should not cause Ms. Campbell to be evicted. Call 1-800-732-6643 and press “4” to report fraud.

For more info, go to: detroitevictiondefense.org

Fighting medical issues; she needs your help to fight Flagstar! 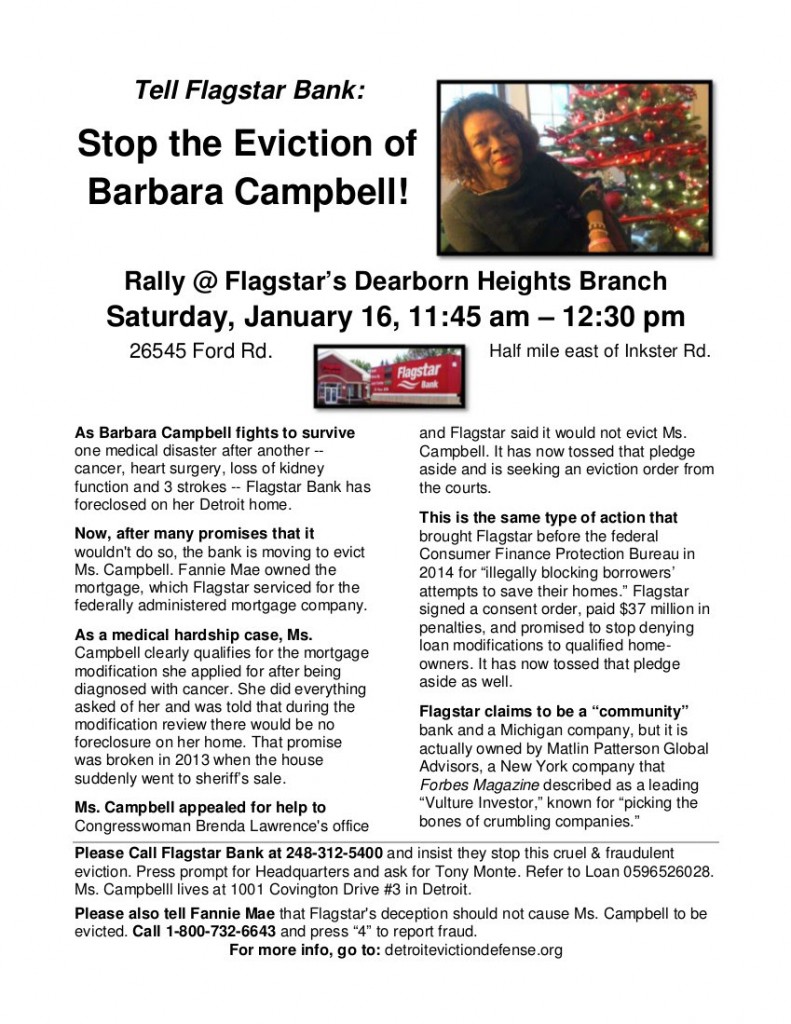 Rosa Parks Institute for Self Development